For more than 150 years the Peterboro Basket Company has thrived in the heart of historic Peterborough, New Hampshire, in the serene shadow of Mt. Monadnock, surrounded by four seasons of the world’s most exquisite natural beauty. 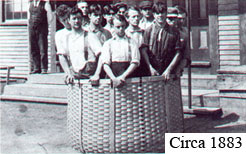 The history of the Peterboro Basket Company dates back to 1841 when Amzi Childs came to Peterborough from Deerfield, Mass., to work on the manufacture of lead pipe. In 1854 he began weaving baskets in a building erected by Moses Chapman in 1830 as a wheelwright shop between Depot Street and the railroad tracks. Amzi Childs and Asa Henry made baskets for many years and had an excellent reputation. Their business burned in 1891. The business was sold to the McLane Basket Factory of Milford and moved there.

Henry B. Needham, “the dean of the basket manufacturing business in Peterborough,” came to town in 1875 and for 15 years was foreman at the Childs’ factory. After that factory burned in 1891, Needham established the Needham Basket Factory in a part of the White Machine Shop at Elm and Water streets. He constructed a new building in 1893. In 1916 the H. B. Needham Basket Company incorporated and purchased the shoe factory near the depot. In 1920 the Peterborough company was organized to build a new factory and combined with the Milford company. In 1926 the building was damaged by fire and the present Peterboro Basket Co. organized. 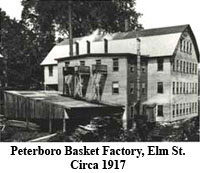 Walter Hood, now semi-retired, has worked at the Peterboro Basket Company since 1962. By April, 2000, Hood had 50 years of basket making to his credit.  He is quite the celebrity. “I like making baskets. They’re one of the oldest creations of man. They date to before my time. I love my work,” Hood said.

The rugged natural beauty of Peterboro has inspired Yankee artists like Thorton Wilder, the writers of Yankee Magazine, and the crafters of Peterboro Basket. More than a business, Peterboro Basket is a Yankee tradition. Although it has become an industry leader in baskets, this family owned and operated company has never forgotten the quiet, careful attention to detail with which Amzi Childs wove that first basket 150 years ago.